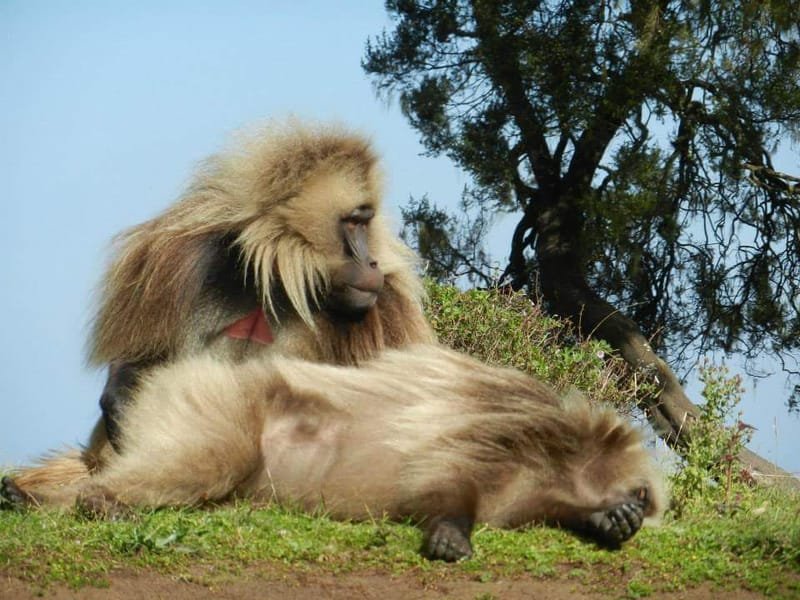 Day 1- International flight to Addis Ababa and continue by domestic flight to Bahir Dar. If arrival time in Addis Ababa is in the morning, our staff will welcome you at the airport and you will proceed to a short city tour of Addis Ababa before flying to Bahir Dar

After breakfast you will go on a boat excursion in Lake Tana to visit some of the monasteries known for their religious attributes and decorations as well as for their impressive display of illuminated bibles written in Ge'ez.

In the afternoon drive to the famous Blue Nile falls on a gravel road. Then take a pleasant walk from Tisa Abay town, named after the water fall which means “smoking Ababy”, for around two hours round trip. From here you head back to the river for a short boat ride to meet your vehicle on the other side.

Day 3 –Drive from Bahir Dar to Gondar via Awra Amba and City Tour of Gondar (180KM).

Drive to Gondar with multiple stops for country house visits, photo stops & to explore Awra Amba Community. Awra Amba community & its members are distinct from the rest of the surrounding society for addressing deep rooted social glitches. The community addresses Gender equality, Basic human rights, and support for the elderly & disables in its utmost level.  Religion plays no role for the principles mentioned above. It is to some degree similar to the former Kibbutz in Israel.

Upon arrival in Gondar check in to your hotel and after lunch explore historic sites of Gondar, including a visit to the Royal Enclosure, with six castles and several other buildings, Debre Birhan Selassie church decorated with the surprisingly beautiful angle faces on the ceiling and the bath of king Fasiledes at which thousands of Ethiopians celebrate the Timkat festival every January.

After early breakfast drive to Simien Mountains National park, a UNESCO World Heritage site. Start hiking at Simien lodge for 3 to 4 hours with multiple viewpoint stops for pictures. During the hike you will spot large groups of the endemic Chelada Baboons who roam the mountainous area.

The scenery today is breath taking, the further you hike in to the heart of Simiens the scenery becomes remarkably fascinating. The route takes you via Jimbar water fall and  you may possibly spot clip springer’s, Menelik bushbucks and a variety of bird specious including endemic ones such as White-backed Tits, Thick billed Raven and more.

Trek to Chenek via Imet Gogo (3926m). The Imet Gogo summit offers the greatest of the Simiens view with nearly a 360 degree view of the magnificent mountain chains. This day holds a greater possibility of seeing the Walia Ibex, different types of Flora, Faunas and birds including Lammergeyer.

From Chenek you head eastwards towards Ambiko, after crossing the Bwuahit pass (4200m) you will reach a view point from a distance of the Ras Dashen (4533m) which is the highest mountain in Ethiopia.  The path will then drop down steeply to 3300m taking you through the valleys to Mesheha River (2800m), then follow the path back up again steeply until you reach Ambiko Village.

You start early, to the village of Mizma. On the way you will see the unique high land vegetation Giant lobelia which can be found in large areas of the Mountains, after which you continue on a sharp ascent to a ridge crest overlooking a large valley. The path then follows along the side of the valley straight to Ras Dashen, after a while you will reach a point of seeing three distinct buttresses. The buttress on the left is the summit of Ras Dashen (4533m). After you arrive at the highest point of mountains in Ethiopia return to Ambikwo.

Rather than retracing your trek to the high land on the way back continue to the low land which will give you the chance to see a greater range of the Ethiopian countryside. Descend from your camp, Ambiko to the river and after a short ascend walk through a cultivated land where you will have a lunch break, continue trekking to your camp site Sona.

This is a day of descent and as you approach leaving behind the high plateau.  The trek takes you to one of the hottest places in the Simien Mountains and the route crosses several major Mountain ranges as it drops nearly 1000 meters near Ansiya River.  Sona were our campsite is located is a head of Ansiya river ascending 1000 meters again.

After Breakfast at your Camp start the easy hike to Mulit Campsite. Today offers plenty of chances to interact with the local people and learn about their traditions, customs and their way of life.

A short and final trek through the farm land for 2 hours to the small town of Adi Arkai (1700m) where our car for the drive to Gondar Awaits. Here you will depart the trekking crew and drive to Gondar.

You visit the first cluster of the rock-hewn church before lunch and the second cluster in the afternoon. These churches are cut from solid rock, some are “fully monolithic churches” and some are Semi monolithic. The most famous church is Bête Giorgis, named after a patron saint of Ethiopia, carved in the form of a Greek cross. It is exceptionally well preserved and the most stunning of all churches.

Get transferred and check in to your hotel. Axum was the seat of the ancient capital of the Kingdom of Axum and is the center of Christianity in Ethiopia. After lunch start to visit the Steal Park, the Archeological museum, St. Mary’s Church- the final resting place of the Ark of the Covenant, ruins of Queen Sheba’s Palace and King Kaleb’s Tomb.

Explore the National Museum which houses some of Ethiopia’s Historic treasures, were the oldest hominid ever found in the world is kept, known as Lucy or Dinkinesh continue to the Ethnographic Museum and the Holy Trinity Church which is the main cathedral and the resting place to the remains of Emperor Haile Selassie. After lunch proceed to the largest open market in Africa, Merkato and then to Entoto. Palace of Menelik-II, the founder of Addis Ababa is located on Entoto Mountain, and offers magnificent views of the surrounding eucalyptus forest and Addis Ababa below.